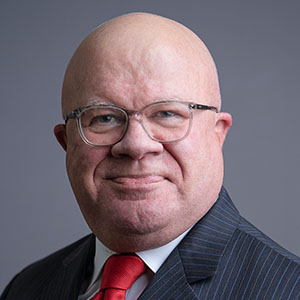 After eight years as the executive director of Oklahoma Credit Union Association and more than two decades in Oklahoma politics, Nate Webb has announced his retirement, effective June 30.

OKCUA is the Oklahoma City-based government relations arm of the Cornerstone League and provides state political affairs and legislative expertise on behalf of member credit unions in Oklahoma.

“We wish Nate well in his transition to the next phase of his life,” said Cornerstone League President/CEO Caroline Willard. “Nate is a consummate professional, and we can attribute our success in Oklahoma directly to his accomplishments on behalf of credit unions and his strong relationships with elected officials.”

Webb’s expertise is the culmination of two public-facing arenas, journalism and politics, which spans more than 40 years.

His professional career began as a broadcast journalist covering the capitol in his home state of Maine. He moved to Florida to become the primary reporter covering the Kennedy Space Center and later a news director in Orlando. He transitioned into politics during Oklahoma’s Right-to-Work campaign in 1994, alongside Gov. Frank Keating, and has since served as a senior advisor in a gubernatorial campaign, as well as several congressional, statewide, and legislative campaigns.

From 2003 to 2006, Webb served as chief of staff for Mary Fallin in her final term as Oklahoma’s lieutenant governor. In 2010, he again became Fallin’s chief of staff, this time for her two terms as a U.S. congresswoman, and he traveled regularly between Oklahoma City and Washington, D.C.

Before becoming OKCUA’s executive director, Webb was a partner with Capitol Gains, an Oklahoma City lobbying firm that represented several Fortune 500 companies and others, including Oklahoma credit unions.

“Nate Webb has been a tremendous asset to Cornerstone’s advocacy team,” said Jim Phelps, Cornerstone EVP and chief advocacy officer. “For over eight years, Nate has been leading our state and federal advocacy outreach in Oklahoma. His extensive network of contacts in the Oklahoma state capitol and in D.C. have enabled us to effect positive legislative changes on behalf of credit unions. We’ve been very fortunate to have someone with Nate’s political expertise on our advocacy team. Congratulations, Nate!”

“I’ve made lifelong friends throughout my career,” Webb said. “It’s hard to encapsulate how important that is.”

In the political arena, he speaks most highly of Oklahoma Congressman Tom Cole. “He was a mentor for me before he was even in Congress,” Webb said. “I met him when he was a political consultant on a couple of early campaigns I worked on. Over the years, he became not only a mentor, but also a friend.”

Congressman Cole had something to say about Nate’s retirement too. “I am happy to congratulate my good friend and executive director of the Oklahoma Credit Union Association, Nate Webb, on his retirement,” said Cole. “His dedication to bettering our great state is certainly commendable. I wish him well and an enjoyable retirement, but I am sad to see him go.”

On a personal note, Webb is most proud of his service in the U.S. Navy and his family. He and his wife Susan have raised two daughters, Summer and Mariah, who are now grown. As for his significant early influences, Webb points to his father Harold Webb.

“My dad didn’t suffer fools lightly,” Webb said. “He had very strong opinions about right and wrong. He encouraged me to conduct myself ethically and with respect for others. He always told me that at the end of the day your reputation is your greatest commodity or your greatest liability.”

Webb said that as a former reporter, he’s proudest of his work during the April 19, 1995, bombing of the Alfred P. Murrah Federal Office Building in Oklahoma City. The events of that tragedy hold significant meaning for him and occupies a sentimental place in his heart. Once he retires, he plans to volunteer at the Oklahoma City National Memorial and Museum.

He also plans to play a lot of tennis, travel, and take more college credits, including a constitutional law class.

Webb holds credit unions in high regard and will miss his daily engagement with them. “One of the things I find inspiring about credit unions is their singleness of purpose,” he said. “I’ve been on the receiving end of association advocacy, and I have seen a real difference. People who believe in a righteous cause will fight for it, and it’s inspiring to see that from credit unions who share a real passion for their industry.”

For the next generation of credit union advocates, Webb offers this advice: “Get involved! That’s the big one. Next, understand the issues. I know that people, especially the younger generations, are disillusioned with the process and find it easier to not get involved, but that would be the death knell for credit unions. Remember that advocacy is not a spectator sport. Decisions are made by the people who show up. If the younger generations don’t pick it up and run with it, our past successes in advocacy for credit unions will fade into obscurity. So, get involved!”

Sign up to the receive the weekly InfoSight eNewsletter email. Existing subscribers can manage their subscription.

Cornerstone members have access to a wide variety of compliance assistance.